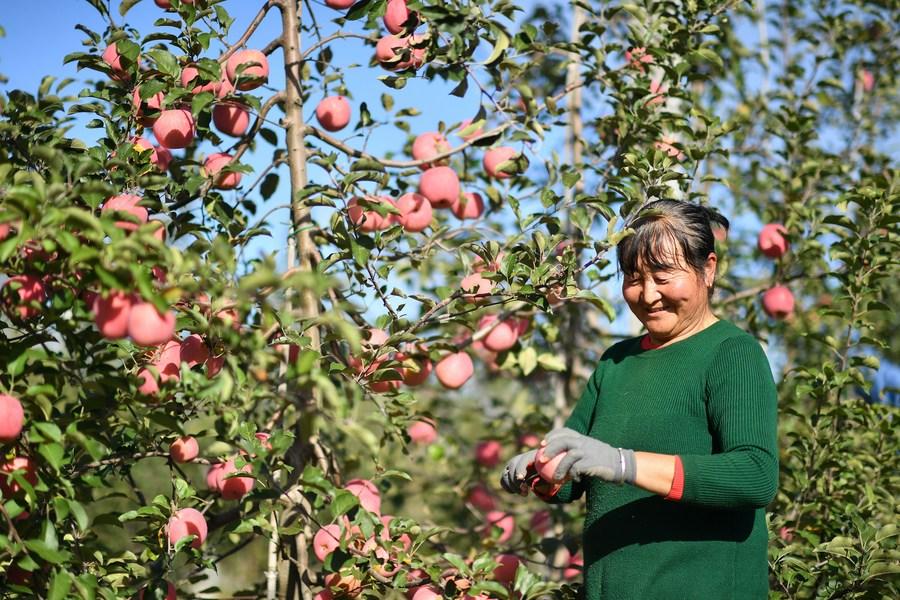 Her store is awash with the sound of keyboard typing and phone calls during the apple season which started in early September. "We are occupied with delivering fruit in the daytime and negotiating with our clients at night," she said.

The Loess Plateau offers optimum natural conditions for apple farming, such as a deep soil layer, abundant sunshine and moderate annual rainfall, making Luochuan a major apple base in China, with a planting area of 530,000 mu (about 35,333 hectares).

It is among over 300 small and micro enterprises in a modern industrial park for Luochuan apples, a national-level apple wholesale market. Companies can enjoy one-stop services from ordering packaging boxes to delivering goods.

"We need only a smartphone," Zhang said.

However, selling apples was initially not easy for her. Zhang and her husband returned to their hometown Luochuan from the Chinese coastal city of Ningbo in 2016, and started an e-commerce business.

"We rushed around every day buying apples from local farmers, packing them at our home, and transporting them to the industrial park. All we had was a three-wheeler," Zhang recalled.

It is the rapid development of the Chinese internet industry that makes Zhang's e-commerce business a success.

With improved internet service infrastructure, the coverage of internet access in China's rural areas climbed to 58.8 percent as of June this year, said a report on China's internet development released by the China Internet Network Information Center.

The promotion of new cultivation modes and standard planting technology, and the improvement of infrastructure have helped improve the quality of apples, laying the foundation for the optimal selling of local apples via e-commerce, said Wei Yan'an, deputy mayor of Yan'an City.

In a self-designed poster hanging on the wall of Zhang's outlet, she wears a suit with an apple in her hands, and the caption reads "people in Luochuan chasing dreams."

Over the years, Zhang has secured fame in the county and her wallet has been fattened. "The development of the internet industry sweetens the apple business in our county as well as my life," she said.