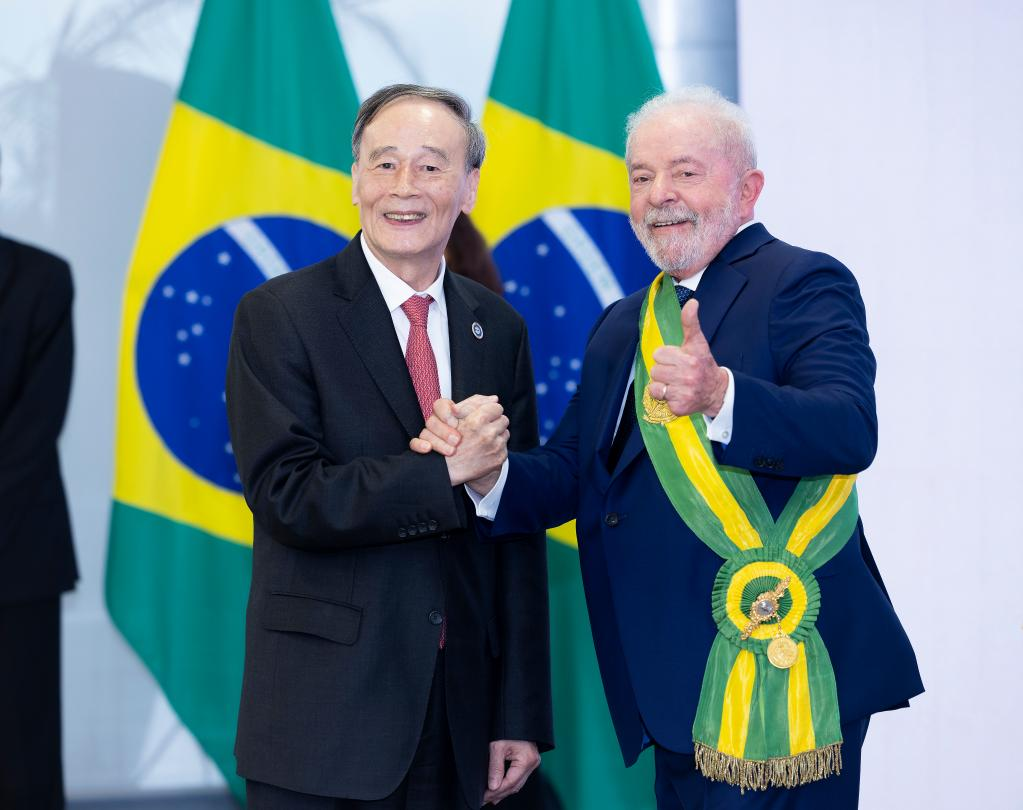 While meeting with Lula, Wang handed over a letter signed by Xi and conveyed Xi's warm congratulations and best wishes to Lula as well as his invitation for Lula to visit China.

President Lula is an old friend of the Chinese people, who has long been caring for and supporting the development of China-Brazil relations, Wang said.

Noting that both China and Brazil have recently completed major domestic political agendas, he said the 20th National Congress of the Communist Party of China (CPC) was successfully held, electing a new central leadership with Comrade Xi Jinping at the core, and mapping out strategic plans for the development of various undertakings for the Party and the country in the coming period, adding that Brazil has also elected a new government.

Wang said he believes that on their respective new journey, both countries and their people, and both the CPC and the Brazilian Workers' Party (PT), will continue to strengthen solidarity and coordination, and jointly create an even better future for China-Brazil relations.

Wang put forward a four-point proposal on the future development of China-Brazil relations. First, he called for strengthening top-level design of both sides and actively promoting bilateral exchanges in diplomatic, parliamentary, judicial, military, local and other areas.

The second, Wang said, is to consolidate and expand practical cooperation in economy and trade, and in particular to actively explore cooperation in such emerging industries as science and technology innovation, digital economy and green economy.

The fourth is to strengthen overall cooperation between China and Latin America, he said, stressing China is ready to enhance communication with the Brazilian side on the issues of holding the Forum of China and the Community of Latin American and Caribbean States and deepening relations with regional organizations such as the Southern Common Market and the Union of South American Nations.

For his part, Lula asked Wang to convey his heartfelt thanks and cordial greetings to Xi, and extended warm welcome to Wang for attending his inauguration ceremony.

Brazil attaches great importance to its relations with China, and hopes to strengthen strategic and long-term cooperation with the country, Lula said, adding that the PT, to which he belongs, is also willing to strengthen inter-party exchanges with the CPC.

Brazil and China, as two countries with important influence, should play active roles in promoting the common progress of developing countries, he said, adding that he looks forward to leading a delegation to China to further deepen bilateral practical cooperation in various fields, enhance friendship between the people of the two countries, and lift Brazil-China relations to a new level.

When meeting with Alckmin, Wang congratulated him on his election, and said that China and Brazil are the largest developing countries in the Eastern and Western Hemisphere, respectively.

For a long time, practical cooperation has always worked as a "stabilizer" and "propeller" in the relationship between the two countries, Wang added.

The China-Brazil High-level Coordination and Cooperation Committee (COSBAN), the highest-level dialogue and cooperation mechanism between the two governments, has played an irreplaceable role in deepening bilateral relations, and planning and guiding cooperation in various fields between the two countries, Wang said.

Wang said he expects that Alckmin will lead the Brazilian team of COSBAN to strengthen alignment with China, so as to inject new impetus into the in-depth development of bilateral relations in the new era.

Noting that the friendship between Brazil and China is timeless, Alckmin said the two sides enjoy extensive fields of cooperation, strong complementarity in economy and trade, and broad prospects for development.

The Brazilian side is willing to continue to make good use of the COSBAN mechanism, further strengthen communication with the Chinese side, seize opportunities and tap potentials so as to upgrade their level of cooperation, Alckmin added.

When meeting with Mourao, Wang said the Chinese people value friendship and will never forget their old friends.

China highly appreciates Mourao's important contributions to promoting the sustained and healthy development of bilateral relations, Wang said, hoping that Mourao can care for and promote the development of China-Brazil relations as always.

Noting that China-Brazil relations have made remarkable progress in recent years, Mourao said that he believes bilateral relations will be a priority for Brazil's new government, and that he is willing to continue to make contributions to the Brazil-China friendly cooperation.

Chinese President Xi Jinping's Special Representative Vice President Wang Qishan hands over a letter signed by Xi to Brazil's new President Luiz Inacio Lula da Silva while meeting with him in Brasilia, capital of Brazil, Jan. 2, 2023. At the invitation of the Brazilian government, Wang Qishan has attended the inauguration ceremony of Luiz Inacio Lula da Silva and met with him in Brasilia. (Xinhua/Liu Bin)