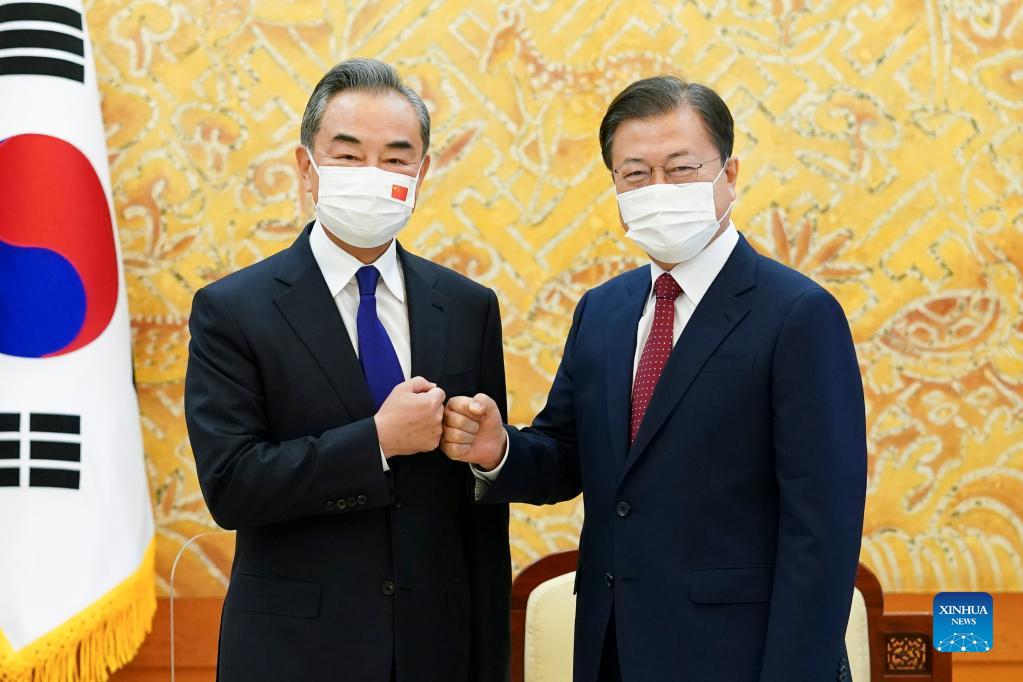 During the meeting with Wang, Moon said that South Korea is ready to work with China to maintain the momentum of high-level exchanges, expand people-to-people exchanges and push for more fruitful cooperation in economy, trade and environmental protection.

For his part, Wang said the two sides should take the 30th anniversary of the establishment of diplomatic ties as an opportunity to push for greater development of bilateral relations.

On the same day, Wang also met with South Korean Foreign Minister Chung Eui-yong, with both sides agreeing to establish a regular communication mechanism between foreign ministers of the two countries.

The two sides also agreed to hold a new round of high-level strategic dialogue between foreign ministries of the two countries and China-South Korea "2+2" dialogue on diplomacy and security as soon as possible.

During their meeting, Wang said that since the establishment of diplomatic relations nearly 30 years ago, China-South Korea relations have reached new heights and become more mature and stable.

The two countries have not only achieved mutual benefit and win-win results at the bilateral level, but also played a role as a guardian of peace and stability and facilitator for development and prosperity in international and regional affairs, he added.

In the face of a major shift in the international landscape, the two countries should further establish a sense of community, continue to expand common interests and tap the potential of cooperation, so as to promote the upgrading of bilateral relations, Wang said.

Wang said that China, which opposes politicizing the COVID-19 origins tracing and instrumentalizing the origins tracing work, is ready to work with South Korea to deepen cooperation in fighting the pandemic.

China is willing to speed up the alignment of development strategies of the two countries, accelerate the process of second-phrase negotiations on China-South Korea free trade agreement, and make the China-South Korea Year of Cultural Exchanges a success, he added.

Wang said that China and South Korea could strengthen cooperation on global issues such as climate change under multilateral frameworks including the United Nations, jointly safeguard the security and stability of regional and global industrial chains and supply chains, and facilitate the entry into force of the Regional Comprehensive Economic Partnership free trade agreement as scheduled.

For his part, Chung hoped that the two sides will continue to strengthen high-level interactions, promote anti-epidemic cooperation, deepen cooperation in artificial intelligence, semiconductors and new materials, so as to inject new impetus into the development of bilateral relations.

The two sides also had in-depth exchanges on international and regional issues of common concern.

During his visit, Wang also met with Lim Chae-jung, chairman of the South Korean side of the committee for future development of China-South Korea relations.