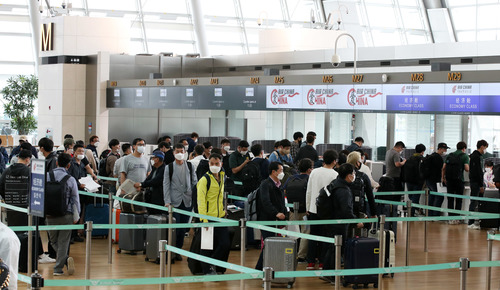 Staff members of South Korean enterprises wait to check in for a flight to Tianjin, China, at Incheon International Airport, South Korea, May 10, 2020. (NEWSIS/Handout via Xinhua)

BEIJING, Sept. 15 (Xinhua) -- The 13th China-South Korea Media High-level Dialogue was held online and offline on Wednesday, with the focus on the media's responsibility in promoting cooperation on people-to-people exchanges and fighting COVID-19.

China and the Republic of Korea (ROK) have maintained a good relationship in recent years and the two countries will mark the 30th anniversary of the establishment of diplomatic relations next year, said Xu Lin, deputy head of the Publicity Department of the Communist Party of China Central Committee and director of the State Council Information Office.

Xu called on media outlets to put more emphasis on the two countries' joint efforts to contain the pandemic and undertake the responsibility of promoting links between the two peoples.

Hwang Hee, minister of culture, sports and tourism of the ROK, said that news and media outlets should take advantage of digital technology and play a bigger role in promoting cultural understanding and mutual trust between the two peoples.