Today, we publish the 2021 Commitment to Development Index (CDI), which tracks powerful countries' policy efforts on development across eight important areas, from development finance to migration. One of the CDI's focal areas is the environment, which matters for everyone but is especially critical to people in lower-income countries. In a key year for climate negotiations, the CDI can tell us which countries are doing well on policies to protect the environment and which have room for improvement.

The CDI environment component looks comparatively at 40 countries across key policy areas, from fossil fuel subsidies to emissions levels to carbon pricing. We find that the top-ranking countries—Sweden and France—score well on both development and environment. But wider trends in policy for climate are not encouraging. In this blog we look holistically at the latest emissions data across CDI countries, and we highlight key policy areas—incorporating fossil fuel subsidies and production to carbon pricing—where countries are leading or lagging.

The CDI produces one of the few comparative assessments of international environmental contributions. Following our review of the CDI last year, we reworked the environment component to have a stronger focus on the different dimensions of climate policy while also capturing other environmental issues, including fishing subsidies and biodiversity and other treaty participation.

As with all indicators in the CDI, each environmental indicator is calculated in a comparable way—often per head, or relative to national income (GNI). The indicator weights are chosen to reflect our judgement on the importance of the indicators; though to keep things simple, each of the eight components carries equal weight in the overall CDI score.

In the 2021 CDI, Sweden and France rank first and second overall, which are also their ranks in the environment component. Portugal, Spain, and Chile complete the top five on environment. You can see the full environmental rankings here.

The largest global economies, China and the US, rank 22nd and 37th respectively on the environment component. China's direct emissions are almost double those of the US, but this reflects its population size; a better comparative measure is on a per capita basis, where China's are less than half of the US's. China gives a larger share of its GNI in state subsidies for fossil fuel use, but the US produces more fossil fuels per capita.

Total emissions are on the rise

Greenhouse gas emissions are the most important indicator of climate policy performance. The best-ranked country on the environment component, Sweden, has direct annual emissions of 5 tonnes of CO2 equivalent per head, half the CDI average. India has the lowest emissions per capita, at just over 2 tonnes per head, and ranks 6th in the environment component. The lowest ranking countries on environment—Canada, the US, Australia, UAE, and Luxembourg—each emitted 20 tonnes of CO2 per head or more. These countries' income levels are comparable with Sweden's, but they have direct emissions four times as large.

"Emissions" are not only those directly emitted, although in most cases this makes up the largest share of a country's emissions profile and are the basis of most countries UN commitments. A country can also effectively outsource emissions by importing goods and services from other countries. In this year's CDI we count net emissions, or imported minus exported emissions, whereas last year, emissions from trade were calculated as just imported emissions. The new method thus avoids double counting in-country emissions for products that are exported. The largest positive net emissions per head from trade are in Luxembourg and Switzerland. South Africa and Russia are large net exporters of greenhouse gas emissions and China is a slight net exporter. Emissions from land use and land-use change are recognised as more difficult to measure, though we prefer to include some estimates rather than exclude them.

Summing all three types of emissions (direct, trade, and land use and land-use change), total emissions across all CDI countries were higher in this year's CDI (using the latest available data as at end May 2021) than the 2020 CDI. However, 29 of the 40 countries in the CDI did reduce their per head emissions.

Figure 2. Net emissions per head, direct and indirect (trade and land use), tonnes per year 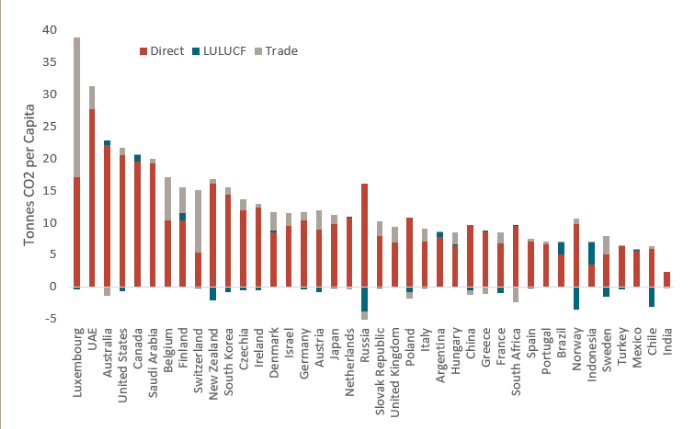 An image of the net emissions per head, direct and indirect (trade and land use), tonnes per year

One key policy tool in addressing climate is the pricing of carbon, particularly through emissions trading.

Carbon prices as assessed in the CDI are the additional cost imposed on emitting 1 tonne of CO2 from emissions trading schemes and carbon pricing schemes. On average, CDI countries' pricing schemes add $10 to a tonne of carbon—largely unchanged over the past year and well-short of most estimates of the social costs of carbon (an authoritative report suggests $50-100 per tonne will be needed to reach net zero). A quarter of CDI countries have yet to implement carbon pricing. Still, there are some movements in a positive direction. Australia set a price of $6.3 per tonne emitted, stepping up from no additional cost in the prior year. South Korea's emissions trading scheme expanded, with the price rising almost 50 percent and reaching $24.6 per tonne in 2020. China's national emissions trading scheme launched this year but is not yet expected to add much to its carbon pricing. Despite raised ambitions, no country reaches Sweden's level, where each tonne is priced an additional $55.8.

The trend on fossil fuel subsidies is discouraging.

We scale fossil fuel subsidies by the carbon intensity of the fuels they support relative to the cleanest fuel, gas. On this basis, since the previous CDI, direct subsidies for the production and consumption of fossil fuels rose from an average of 0.72 to 0.78 percent of GNI (based on pre-COVID GNI). Chile was the lowest subsidiser, with almost zero subsidies across coal, oil, gas, and electricity, while several countries' subsidies as a share of their income exceed both the amount they provide in development finance and the subsidies they provide for research and development—most notably South Africa, Mexico, Argentina, and Indonesia.

Some progress, but not enough

There is a strong synergy in this year's CDI between the countries that perform well on development overall and those that are strong on environment. There are also some encouraging signs since the previous year, such as Australia, the world's largest producers of coal, implementing a carbon price for the first time, and most CDI countries reducing their per head emissions. However, total emissions of all countries in this CDI are higher than they were in the previous edition and incentives around fossil fuel use are less oriented to divestment than last year. In the face of the climate emergency, it is clear that the most powerful economies and development actors must do more on the environment.